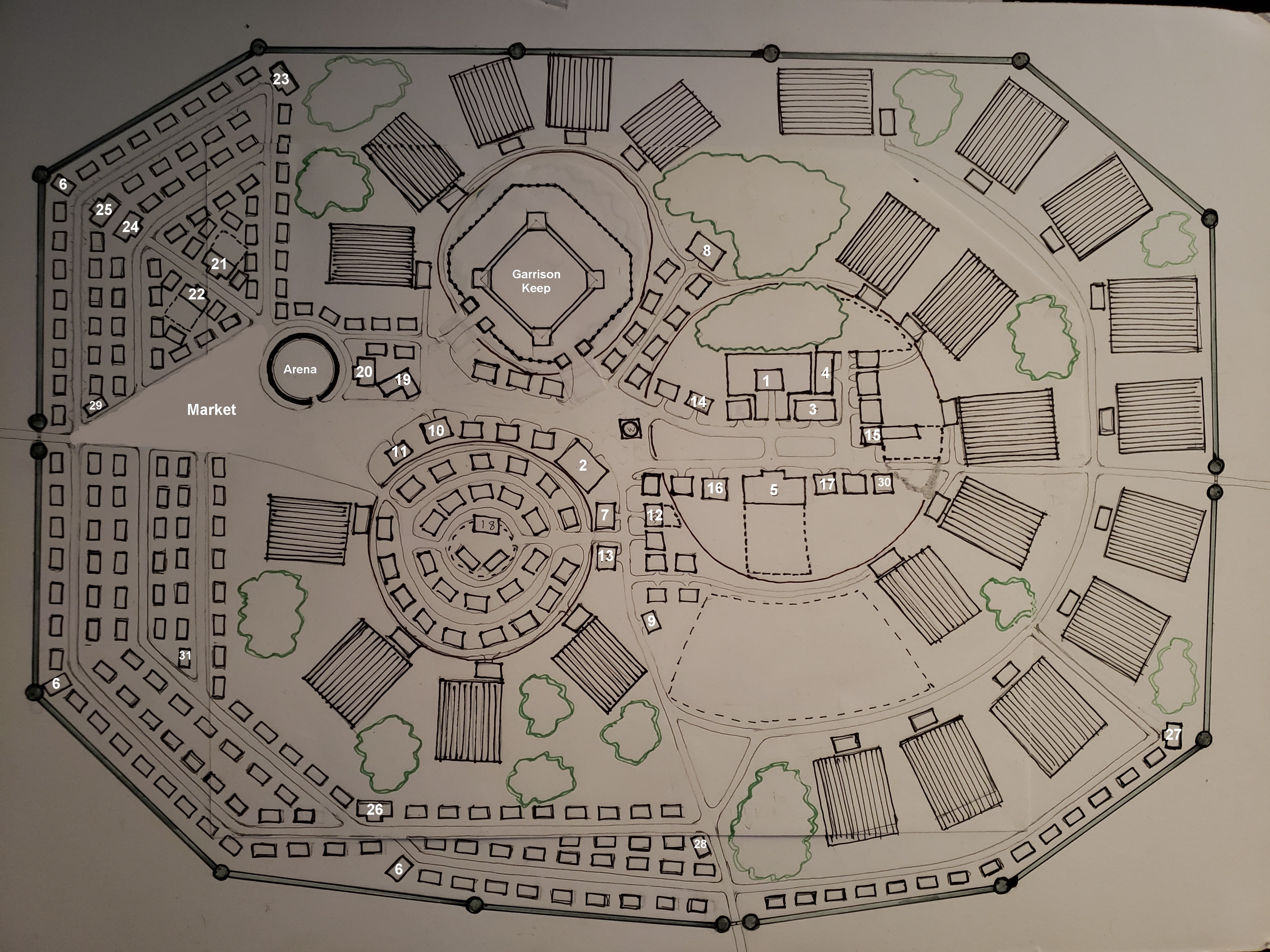 Along the eastern borders of the Commonwealth the perpetual threat of Gnoll attack easily overshadows the risks of petty crime. Towns tough enough to survive earn a rough reputation. Dreadhill may be the worst of them. Here the rule of fear holds sway over the rule of law. Thugs, thieves and cutthroats lurk in plain sight as part of the local patina.

Criminal activity is tolerated so long as everyone does their part when the church chimes signal an imminent attack. Then every man must rally to the wall with a bow or a spear to defend the town against monstrous foes.

Locals have learned to accept bad apples within their midst, because more often than not, vicious thugs are just as dangerous to the evils abroad as the townsfollk within. Even so, unspeakable and unforgivable acts are swiftly punished here. Public hangings are a regular spectacle with be-headings reserved for the worst offenders.

The highest hand of Justice in Dreadhill should be the head Priest of the Church of Wruen, the acting judge and lawmaker, as it is in most townships. But ‘drunk Judge Ganon’ as he is known, is a lout and an outcast of a much more prestigious church further inland. Locals only depend on him to sober up for the most serious matters. A few of the odd-dozen militant clerics under his command arbitrate lesser disputes in addition to their regular tax collection duties.

Local justice is often handled by members of The Legion who keep a well-stocked barracks within the walls. The mandate of the Legionnaires does not include local law enforcement (which historically is the demesne of Marshals and Archons), but locals learned it is often easier is to coax a Legionnaire into punishing someone as an ‘act of self defense’ than it is to plead their case to the town Judge which take weeks, sometimes months to affect restitution’s.

Marshal Barlo Sid is a grossly sour and snarly individual. A man of ill-humor and harsh words who is also devoutly religious. His deputies roam the streets in squads of no less than five carrying maces, short swords, bola’s and nets. As the town jail is routinely overcrowded with those awaiting judgement by trial, Barlo is reluctant to investigate crimes lacking clear evidence or trustworthy witnesses. Barlo loathes to bother Judge Ganon with petty matters, often dealing out harsh beatings and scoldings to wrongdoers who “…should by god know better!” in preference to dragging them to trial.

Sergeant Major Ulich Hoeg is the youngest nephew of Archon Kyro Hoeg (who holds dominion over northern Dreadhelm). Ulich is a fair soldier in his own right, but pales by reputation to his uncle Kyro, long renowned as a deadly warrior and crafty technician. His standing orders are simply to patrol the lands around Dreadhill and keep the town safe.

Ulich’s garrison of soldiers has grown weak and ineffectual compared to that of Legionnaire Commander Turak the half-orc. Turak has accepted his role as Dreadhill’s defacto ‘defender in chief’ of without complaint, although little in the way of gratitude is offered back in return. A Legionnaire can never earn a lordship after all. Their duties are always bound to the sword.

Ascendant campaigns can view previous versions of their pages, see what has changed (and who did it), and even restore old versions. It's like having a rewind button for your campaign.

We've already been saving your edits, so if you upgrade now you will have instant access to your previous versions. Plus, you get a 15-day free trial, so there's nothing to lose.

I'm sorry, but we no longer support this web browser. Please upgrade your browser or install Chrome or Firefox to enjoy the full functionality of this site.